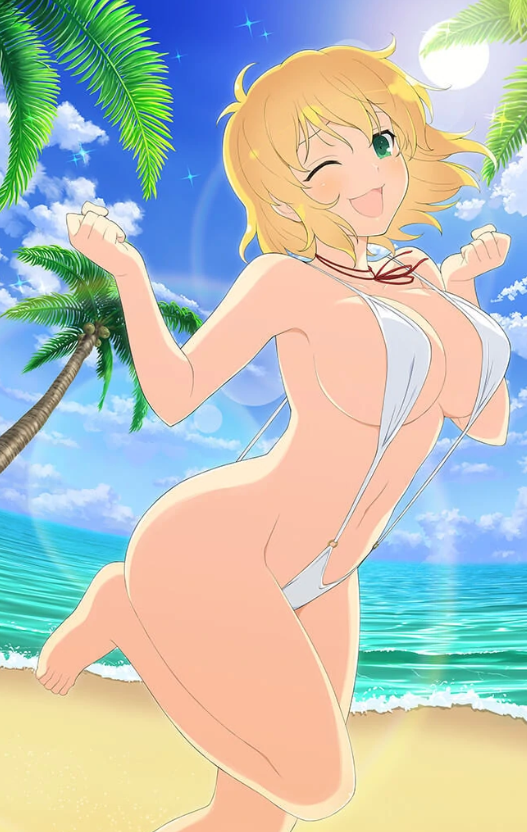 Wrestling Stats:
Strikes: 3/5 – Will try to inflict pain this way both on themselves and opponents
Submissions: 5/5 – Very creative in ways to embarrass and tie up others into submissions
Powerhouse: 3/5 – Will us on others a lot even if they're too big
Aerials: 3/5 – Will Dive regardless of the possible damage she may cause to herself
Counters:4/5 – Can counter most moves in the lewdest ways possible

Fighting Style: All arounder/Sexfighter
Strategy: Humiliate opponents and embarrass them along with trying to cause and receive as much damage possible. If she is outmatched she will sometimes just let them bully her in the match.

Signature/spot moves:
Bronco Buster with Rapid fire humping Spanky (Abdominal stretch with her licking her hand spanking the opponent) Pleasure Chair (She will lock their arms around her legs, forcing their face into her giant rump, before locking her arms and spanking them, licking their sex, fingering them, or doing whatever she wants with them. Once she's done she will try for a facesitting pin) Glazed Cinnamon Bun (She will hump and oppoents face, until they end up covered with her hot sticky "frosting" once or twice, then she will lean forward and lock her legs and lower body around their head sitting right on your face and lightly wiggle my hips to really rub in the sticky substance for a few moments before getting off, leaving their face shiny and dripping with the gooey liquid)

Pussy Cat Piledriver (She will put the opponent into a reverse piledriver, shoving their face into her bottoms forcing them to face her peach, before hitting a gotch piledriver. She will sometimes say she won't hurt them if they lick her peach, but she will do it regardless) Paparazzi's Dream A Glimpse of the peach (Rosy will sit on an opponents face and grab their ankles and lifted their legs, spreading them out in the opposite direction in a painful and embarrassing move) Personality: Rosy is the definition of a sadomasochistic. She loves feeling pain and will try to give back just as much to the ones who do it too her. She will act nice to people but will also try and do things just so she can get punished for it. She pretty much always is in a lewd mindset, even groping people who got rather large naughty bits. She is more than often showing off her bust to the other girls both friend or foe just for the heck of it

If you want my discord-SweetHeartSoftie#7437
Top